Leisure and Luxury in the Age of Nero 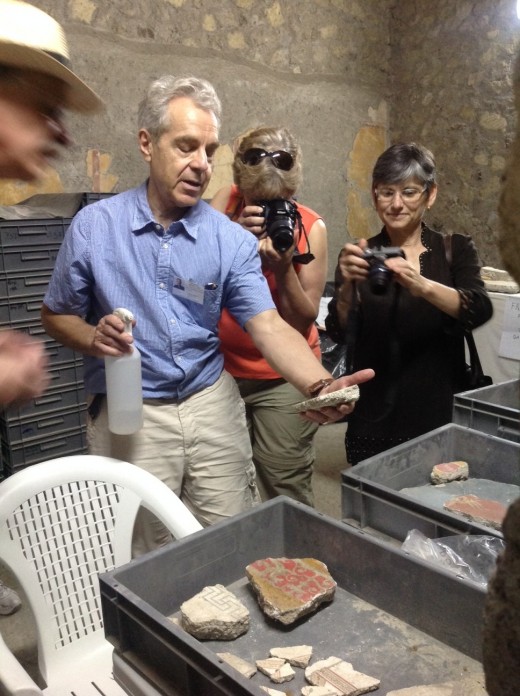 Professor Regina Gee was the instigator and co-curator, together with John R. Clarke and Elaine Gazda, for the 2016-2017 exhibit, “Leisure and Luxury in the Age of Nero, the Villas of Oplontis near Pompeii,” which traveled to three university museums: the University of Michigan’s Kelsey Museum of Archaeology, MSU’s Museum of the Rockies, and the Museum of Art at Smith College in Massachusetts. Largely in response to the work of the Oplontis Project (oplontisproject.org ), the Italian Ministry of Culture granted permission to bring material finds belonging to two sites to the United States for a one-time only loan period. From Villa A (‘of Poppaea”), a luxury seaside villa, the material included fresco fragments, and some of the marble sculptures that once decorated the extensive gardens. From Villa B, an adjacent Roman warehouse and multi-use emporium, the exhibit featured objects of everyday use, from bronze lamps to gaming dice, as well as the jewelry and coins recovered next to the skeletons of Romans fleeing for their lives in the shadow of the eruption. Material from Villa B also provided insight into a thriving wine export company, with evidence of every stage of the business for preparing terracotta amphora to be shipped all over the Mediterranean. The bulk of the material had been in storage and never previously exhibited. While the exhibition highlighted the type of imposing architecture and extravagantly decorated spaces belonging to Rome’s wealthiest citizens, it also foregrounded the role of non-elites in daily life. The overarching goal of the exhibition was to provide a unique opportunity to share the rediscovery of these extraordinary Roman sites with the public, while simultaneously making this material accessible to the international community of art historians, archaeologists, and students. The accompanying catalog, a stand-alone scholarly text, was published by the Kelsey Archaeological Museum and reviewed by the Bryn Mawr Classical Review (2017.02.16).

In her role as guest curator for the iteration of the “Leisure and Luxury” at the Museum of the Rockies, Dr. Gee created a substantial amount of new educational content and learning spaces. Among the venues, the Museum of the Rockies iteration was unique for the way in which the fabrication incorporated student projects across several disciplines. Under Gee’s guidance, studio art majors painted several of the spaces, including the domestic household shrine. One graduate from the School of Art’s graphic design department created accurate mosaic floor “wraps” and another created environmental animations. A wonderfully unusual collaboration between the faculty and graduate students of the School of Architecture and the Department of Earth Sciences resulted in an educational three-dimensional model of the volcanic topography and coastal cities of the ancient Bay of Naples and the phases of the Plinian eruption of 79. (Link to the Museum of the Rockies exhibit page https://www.museumoftherockies.org/exhibit/the-villas-of-oplontis-near-pompeii1).

Click on an image to view as a slideshow.